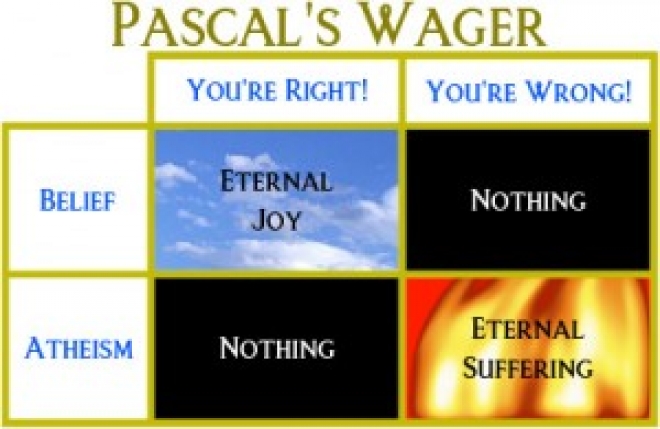 We have all heard the argument: What do you have to lose by believing in God? The argument continues by  pointing out that if one does not believe in God, and they turn out to be wrong, they lose an eternity of bliss.  Essentially, according to this argument, there is more to gain and less to lose by believing in God than in not. This reasoning is Pascal's Wager in a nutshell.

Pascal was a French philosopher who lived in the 1600's. He suggested that it is impossible to reason out whether or not God exist. We can, however, determine the benefits of belief or unbelief. If one believes, and they turn out to be right, they gain eternal bliss. They lose nothing if they are wrong. An unbeliever gains nothing if they are right, but lose everything if they are wrong. Is it therefore more beneficial, according to Pascal's reasoning, to wager on God's existence. A more complete description of Pascal's Wager can be found here:

Why This Argument Doesn't Work

My first issue with this argument is that it assumes too much. Pascal assumes that God is benevolent and is the Christian God. Pascal also assumes that one lives a better life if they live as if there is a God. These are two logical leaps Pascal has made right away. But we do not know if God is benevolent, or that God is the Christian God. There is also no evidence that believers live better lives than non-believers.

My second issue with this argument is that it ignores the consequences to the here and now.  Let us assume that if there is a God, that he is the Christian God. Starting with this premise we must also conclude that Christian doctrines, in the advent that there is a God, should be followed. Among these Christian doctrines is inequality between males and females, and discrimination against homosexuals. One might also say that the Bible advocated slavery… but that is another topic. The point is that there are more consequences to consider than just the blissful afterlife. Choosing to believe in Pascal's God also means discriminating against certain groups.

Finally, I am not sure it is wise to invite people to join ones' group on the basis of greed. Think about it… Pascal's argument is that you should wager on God because it benefits you more. This seems contrary to the piety that religions strive for.

There are certainly more refutations, many listed in the above link, to Pascal's wager. These presented here are merely those that resonate with me.

Login to post comments
back to top
© 2018 by HYPERMODERN. All rights reserved.